Hello All! As you know I often invite guest bloggers to share here about their creative projects and today, author Joseph Zitt describes his mystical, fascinating work of fiction, The Book of Voices. I 1st learned about it when he approached me to re-vamp the cover & the more I learned about the novel the more interested I became so here, in the author’s words, is more info. about his work & his career…

In The Book of Voices, a prophet in ancient Judaea who has lost her memory channels the voices of people from myth and history as she seeks to rediscover her true self. As brought to us by a translator in modern day San Francisco who, awakened by the kiss of an angel, transcribes these voices for the present day, The Book of Voices examines how we remember who we are, how we reach out to each other, and how we see ourselves while history and miracles are happening around us. 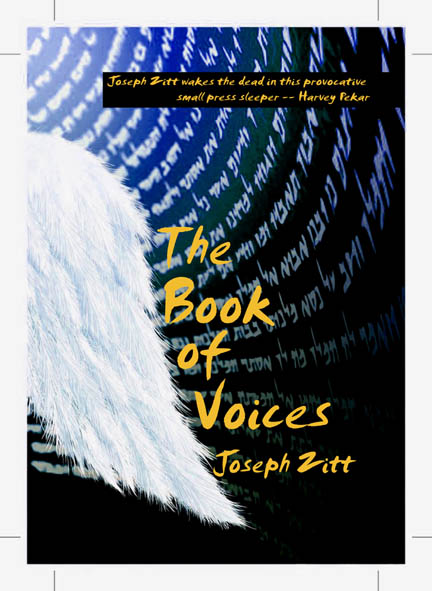 The Book of Voices got started when a community orchestra in New Jersey asked me to write a piece for them and a speaker about Moses. I wrote a monologue showing his thoughts as he stood at the Burning Bush and received its message. From there, I went on to create a total of fifty brief stories, all in first person, in present tense, from the points of view of Biblical characters as key moments in their lives. I discovered another story growing from the connections between them, showing the workings of the hidden school of prophets, deploying magic and arcane skills (as well as their perceptions into how best to help people realize what it in their hearts) to influence the workings of history and, on occasion, to help change the mind of God. From this, I developed a surrounding story, which follows through interludes in the book, of a prophet who is channeling all these voices, then another layer, that of a translator in the present day. Both the prophet and the translator are aided by an angel in using the revealed stories to unlock secrets of their own identities.

While most of my other books have been non-fiction works drawn from my own life or collecting my musical writings, I feel that The Book of Voices is my most personal book, touching most deeply into some of the emotional layers of my life: in writing through the voices of other characters, I found (much like Elisheva, the prophet), my own voice coming through. Perhaps, in some sense, all fiction is in some deep sense autobiography (though not necessarily in terms of the specific characters or explicit plot lines that are shown). In speaking as others, we get to say what we can’t say as ourselves.

The new expanded second edition, featuring a beautiful cover by Lauren Curtis, is the culmination of a project that has taken six years so far, and is moving beyond text into a radio drama series, film adaptations of its stories, and an extensive website at http://www.thebookofvoices.com.

I have four other books in print, including “19th Nervous Breakdown: Making Human Connections in the Landscape of Commerce,” which is published by Black Angel Press (which is where I first worked with Lauren on the design of books by Steven Hart). I have also worked in other media, including dance/theater performance and musical improvisation and electronic works. You can stream and download many of these works and find links to other projects, at http://www.josephzitt.com. I’m currently studying Media Arts and digital film-making in Cleveland, Ohio, where I’m creating other projects related to The Book of Voices.