Hope you’re all enjoying your holiday season so far!  This is the perfect time for my next guest artist blogger, as much of her work revolves around holiday/winter related themes and nostalgia for good times past!  Let me introduce you to NJ collage artist JoAnn Telemdschinow as she shares her work and it’s inspiration…. 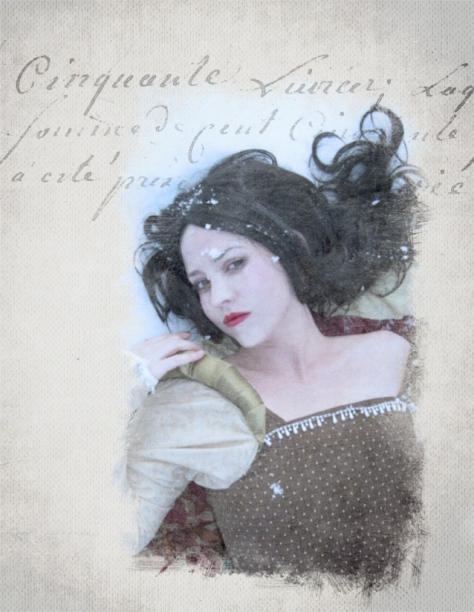 My name is JoAnn Telemdschinow and I’m the founder of Imagined Past. I’ve always loved and been fascinated by art, but I haven’t always been sure how I should express it. While I have a background in art history, I have not studied painting or drawing. On an impulse, I started playing with collage, and found I liked it very much. In 2014, I started learning Photoshop Elements. Since then, through magazine articles and online tutorials, I’ve been developing my skills and exploring how to create different effects.

What inspires my collages? Perhaps the most obvious influence is the art and architecture of the past, medieval times, eighteenth and nineteenth century painting, as well as Chinese and Japanese art. I can happily spend hours in a museum! I also love to travel. I recently went to Paris and took photographs of beautiful old streets and buildings, some of which I’ve turned into collages. I’m interested in languages and scripts, both ancient and modern.

A collage may originate from an image that captures my attention, or from an idea that I want to express. I often utilize vintage art to build my pieces., although I also use my own photographs. I am also fond of incorporating old texts, such as handwriting, book pages, or advertising, into the composition. I try to use texts that relate to the subject of the piece, either through content or cultural origin. Textures play an important role in my collages as well…old paper, distressed surfaces. 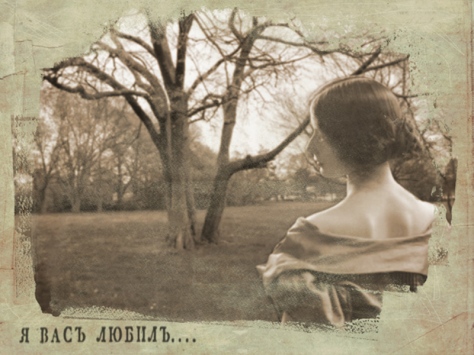 What am I trying to convey to the viewer? Well, I myself am deeply moved by beauty so I try to make my compositions visually beautiful. Beyond that, I attempt to express a feeling or atmosphere. My pictures (like myself) tend to be reflective and nostalgic. I also sometimes imply a bit of a narrative, as in I Loved You with its forlorn woman and titular inscription.

What do I have planned for the future? I would like to explore photography further and use more of my own photos in my collages. I’m working to promote my artwork through social media and my website.  And I’ll be exhibiting in more shows in the upcoming year. I enjoy meeting and talking to people at shows…perhaps I’ll get to meet you at one soon!

Collage has been gaining popularity as an art form and I, myself, have been experimenting with this medium as well.  Now that there are many collage options with various computer programs as well as the old fashioned hand-cut & paste collage, the possibilities are endless!  So, when Todd Bartel sent out a call for collage art for his Strange Glue exhibit, I jumped at the chance and entered a few of my digital photo collages.  He accepted the one below to be in his online exhibit & catalog.  He also put together a gallery show as well.   Todd has really put his heart & soul into this expansive project so I invited him to write a guest blog about Strange Glue & how it began… 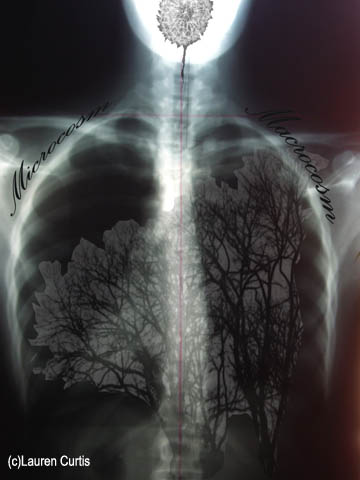 What is your background with collage?

During the fall of 1981, I was exposed to collage, unaware of its potential during my freshman year at the Rhode Island School of Design. During that first year, in both my two-dimensional design classes I poured myself into each and every collage assignment given and there were several throughout the course of that year. I had three instrumental teachers who each contributed to my interest in the medium: Hardu Keck, Alfred DeCredico and Stuart Diamond. Hardu gave me my first assignment, in which I had to create five collages working with the famous quote by Comte de Lautréamont: beautiful as the chance meeting on a dissecting table of a sewing machine and an umbrella. I made over 40 collages for that assignment which for me was an early signal of my love for the medium, but it took two more years before I dove into the process and claimed it as my vocation. It was on a class trip to visit Alfred DeCredico’s loft studio at the end of that year that I actually fell in love with collage, standing in front of one of his collages. But it wasn’t until the first month of junior year when Stuart Diamond got me to apply my love for the medium to my own work in my painting classes. I have been actively studying and making collages since the fall of 1983. I became friends with Michael Oatman, who was one year behind me at RISD, that same year and we’ve been close ever since. We have collaborated on many occasions and our mutual regard for collage and each other’s work has spurred many projects and interactions.

Since those early years all of my work has been collage-based. I have pushed at the boundaries of collage by working virtually, employing additive and subtractive methods and borrowing or appropriating from just about every ism from the last 100 years. I have worked with assemblage, installation, film and traditional papier collé. I adopt techniques as fast as I am able and I think nothing of learning and fusing new techniques as needed. It often feels like I am discovering something new with each project I initiate.

Since 1995 I have actively studied the relationship between landscape and collage and have overtly dedicated my practice to that coupling. Since then, all my work has been series based.

What inspired you to put together the Collage at 100 exhibition series?

I have been working to celebrate the centennial of the invention of fine art collage since the millennial change. I knew I wanted to do something special. I have personal projects I am working on but I also wanted to do something that had a reach into he public sphere. When I moved north to teach again at the Cambridge School of Weston of Weston, MA—I taught at CSW from 1986 to 1989, just before attending graduate school–I was hired knowing full well in 2002 the potential, then, to build a gallery at the school. In fact that is what pulled me back to CSW in the first place. I became the gallery director in 2006, before the building was completed, before we even had a name for the gallery and even in that rough state, I knew I would honor the centennial of Picasso and Braque’s joint invention of collage

I put out a call for collage-based art in July of 2011 and by the time the call closed, on December 30 of last year, I had received 524 applications totaling 3,332 images to choose between. I knew that I would get a lot of applications, but was just not prepared for those numbers. As an artist, a full time teacher, and a curator I am really in a very interesting position to create shows. Fusing these three disciplines is like a creating a massive multi-node collage over an extended period of time. By the time the series is complete, I will have worked for two years, will have mounted three shows and hung hundreds of works of art and published four accompanying catalogs.

One of the things I have the freedom to do is to treat the creation of shows like creating a paintings in that I can allow things to distill while other portions of the greater project take precedence. For example, in the show that you are involved with Lauren, the Virtual Annex exhibition, that is a grouping of 49 artists that I actually could have cut out from the show altogether. But the quality of the work was so high that I kept postponing sending the letters until I finally realized I had a unique opportunity. Despite having too much work in the gallery—keep in mind that to accommodate 130 pieces in a room no larger than twenty-five feet square, I built a twelve by eight foot wall in the space as well as utilized an exterior wall that is forty-four feet wide by eighteen feet high—I decided to invite Lauren Curtis and the other 48 artists to show their work in a virtual setting rather then the analog space of the gallery proper. This was decidedly a strange thing to do.

For the analog show, I organized the exhibition into art-historical categories to examine the evolution of collages many faces, vicariously through the work of contemporary artists whose work easily stands in for a specific isms or references important artistic milestones of collage. Additionally, it examines the nature of analog glue and the strangeness of how artists today have pushed far beyond the original definition of the term collage.

The Virtual show, which was literally completed today (10/10/12), as I uploaded the first proof of the catalog for the show, is organized into categories that examine immaterial glues. In other words, if physical binders hold physical materials, what holds ideas and imagery together? That is the subject of the Virtual Annex.

The Virtual Annex can be viewed on line at:  thompsongallery.blog.com

Many of Todd’s  series can be seen at his blog website: http://toddbartel.tumblr.com/.

The Thompson Gallery website has a full slideshow of the entire analog exhibition as well as an additionally slide show of the installation:https://www.csw.org/podium/default.aspx?t=204&nid=796876

The catalogs for the show may be purchased at:http://www.lulu.com/shop/todd-bartel/strange-glue-traditional-avant-garde-collage/paperback/product-20441607.html